Between the large hemi-spherical head of humerus with shallow pear shaped glenoid cavity of scapula. This articulation allows for considerable range of movement but makes the joint unstable and therefore vulnerable to injury. The glenoid cavity is deepened to some extent by the presence of the glenoid labrum which is a fifro-cartilaginous structure attached round the head of the glenoid cavity, the basr being attached to the bone with the thin edge being free. 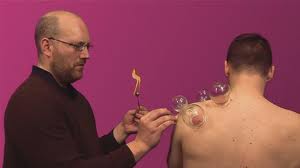 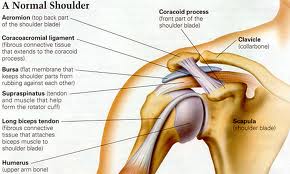 i)        Capsule – attached to margins of the glenoid cavity and to anatomical neck of humerus. Very thin and lax (loose) and when the arm is by the side, it falls into folds inferiorly. This allows for wide range of movement. The capsule itself is lined with synovial membrane.

ii)      Coraco – humeral Ligament – strengthens the joint on the superior aspect. Attached to root of the coracoids process and to superior aspect of greater tuberosity of the humerous.

iii)    Gleno-humeral Ligament – is a weak ligament attached round margins of the glenoid cavity to lesser tuberosity on the humerous.

iv)    Transverse Humeral Ligament – extends from lateral to medial borders of the bicipital groove. This holds the tendon of the bicep in place. 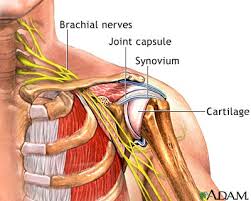 The joint is strengthened by a group of small muscles with their tendons closely related to the capsule. These muscles are called the ROTATOR CUFF and consist as follows:

The inferior aspect of the joint is very weak. 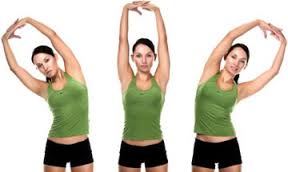 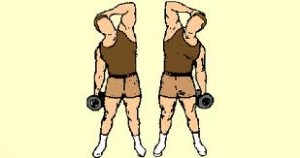 2)      Tendon of long head of biceps which comes from supra-glenoid tubercle within the capsule. It emerges from capsule between the two tuberosities and descends through the biceptal groove. Ensheathed in synovial membrane which prevents friction of tendon between the bone and the transverse humeral ligament.

There are several bursae in the region of the shoulder joint, one very important one called the subdeltoid or sub-acromial bursa. This is very large and is situated between the tendon of the supraspinatus and the acromion process preventing friction of the muscle against the bone 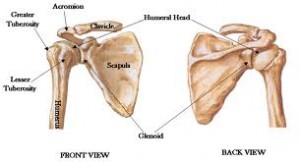 Movement of the shoulder joint:

1)      Clavicular fibres of the pectoralis major

3)      Sternal fibres of the pectoralis major

1)      Initiated by the supraspinatus

All of the above movements combined together. This is when the arm is taken round in a circular movement.